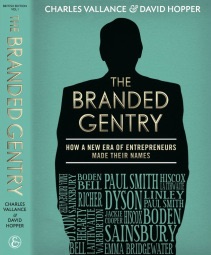 THE BRANDED GENTRY
David Hopper has co-authored a best-selling book with Charles Vallance, founding partner of advertising agency VCCP.  The Branded Gentry is a series of written portraits of successful British entrepreneurs who have put their names to their brands - Tim Bell, Johnnie Boden, Emma Bridgewater, Jackie Cooper, James Dyson, John Hegarty, Robert Hiscox, Tony Laithwaite, David Linley, Julian Richer, John Sainsbury, Paul Smith, and Jonathan Warburton. The book delves into their motivations and personalities, at a time when the trend seems to be moving away from business eponymity. It recounts interviews with each one - their own words and anecdotes forming substantial portions of the text. Each chapter includes not only the philosophies and strategies of these characters, but observes some of the fascinating detail of their everyday lives. Extracts from the book have featured in The Sunday Times, The Telegraph, The Daily Mail, The Financial Times, Marketing, and The Spectator.  (Elliott & Thompson)
The Branded Gentry at Amazon 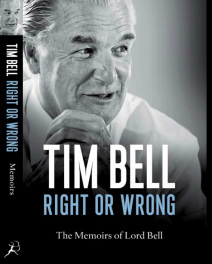 RIGHT OR WRONG - The Memoirs of Lord Bell
​October 2014 saw the publication of this long-awaited memoir, derived from many hours of interviews with Lord Bell, conducted by David Hopper and Charles Vallance over the last 12 months. Tim Bell is the original `spin doctor` and Right or Wrong is his highly personal account of political, commercial and social life from the ‘70s to the present day; a ring-side account of managing Margaret Thatcher’s election campaigns, dealings with Ronald Reagan, F.W. de Klerk, and the Saatchi brothers, and key modern historical moments such as the miners' strike, the Cold War, the poll tax riots, and the end of Apartheid, along with his views on geopolitics today and the 2015 UK election. (Bloomsbury)
Right or Wrong at Amazon